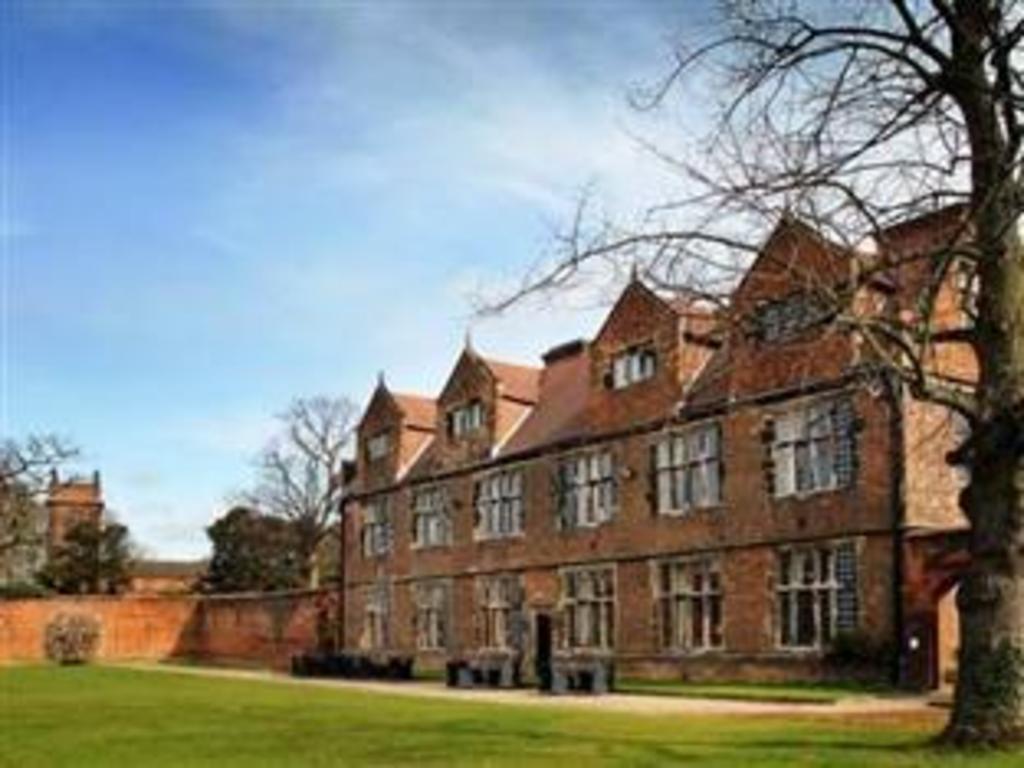 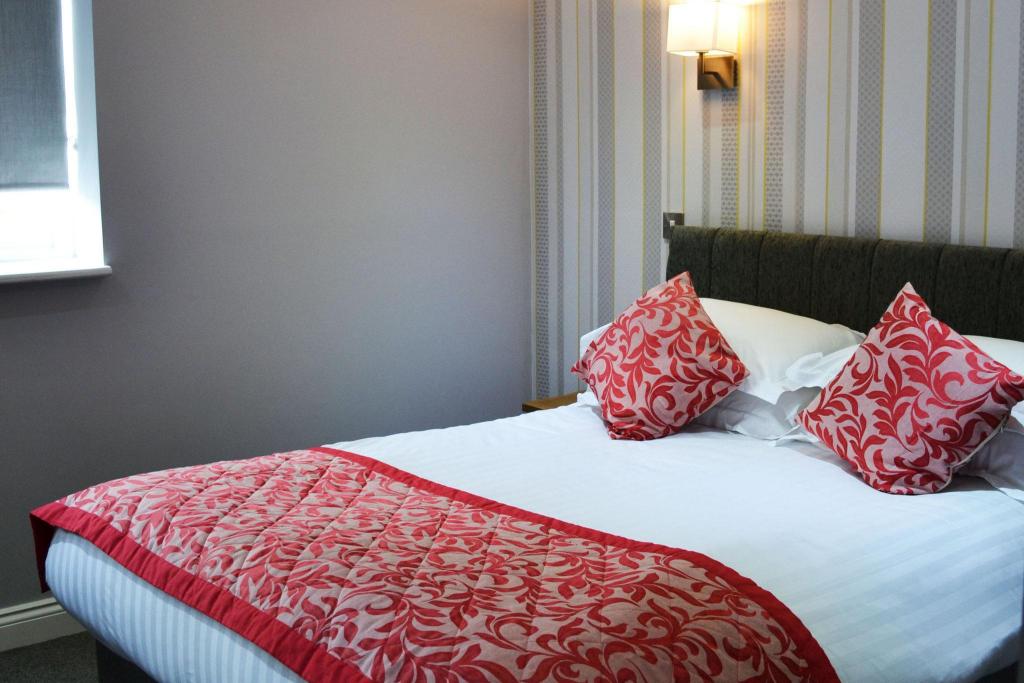 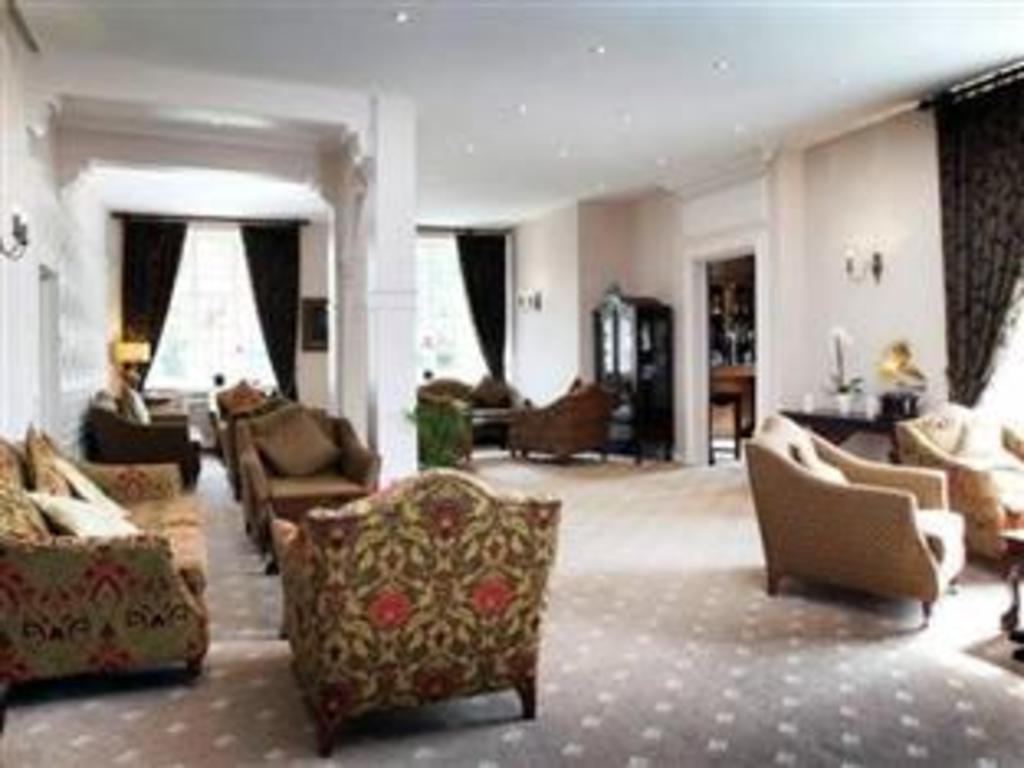 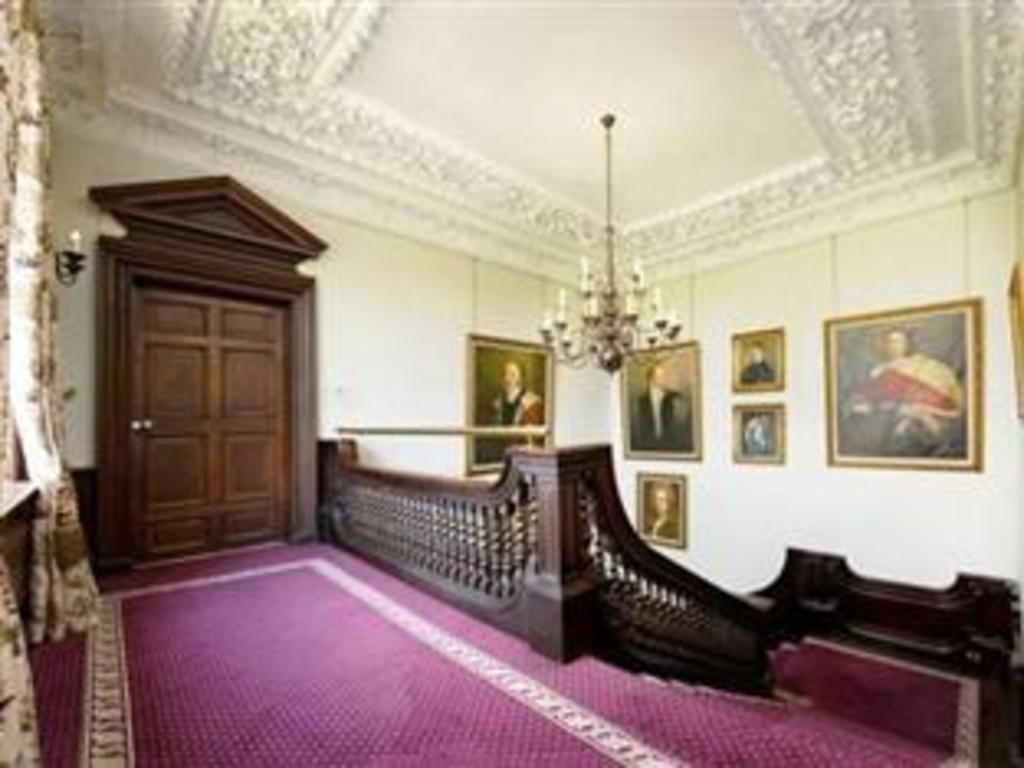 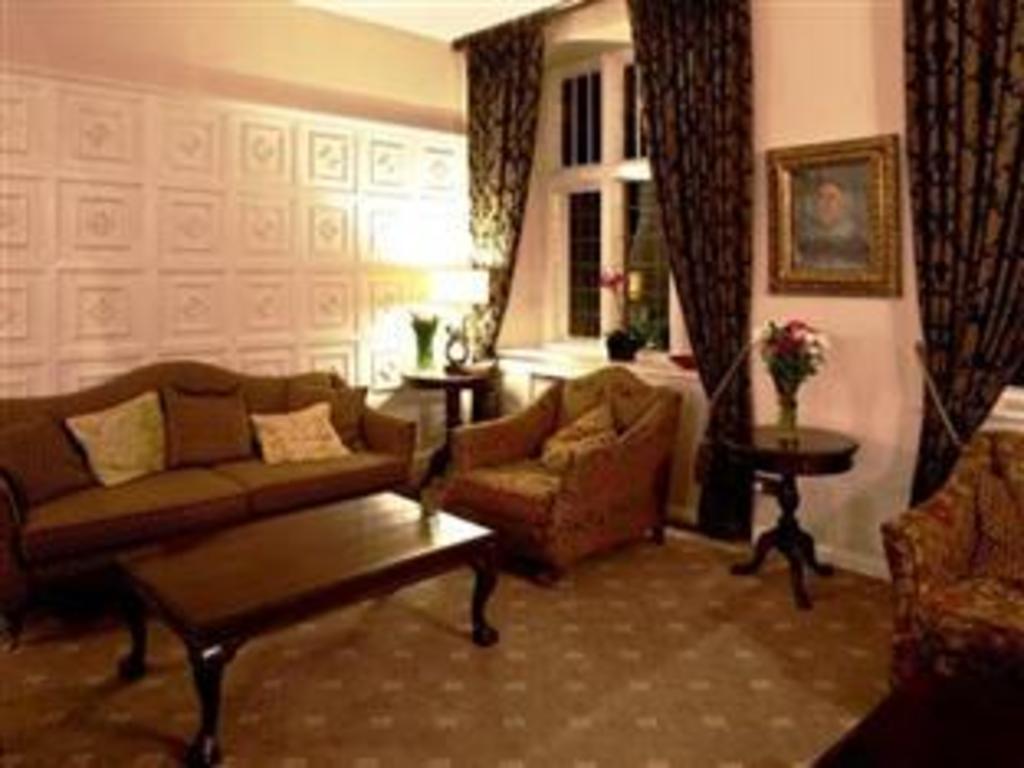 The car parking and the Wi-Fi are always free, so you can stay in touch and come and go as you please. Conveniently situated in the Birmingham Airport part of Birmingham, this property puts you close to attractions and interesting dining options. Don't leave before paying a visit to the famous Cadbury World. As an added bonus, restaurant is provided on-site to conveniently serve your needs.

Free Wi-Fi in all rooms!

Hygiene Plus
This property has self-selected and self-certified the following hygiene measures.Learn more

Free Wi-Fi in all rooms!

Your dates are popular among travelersUsers are booking a place in Birmingham every 17 minutes on Agoda.com

What time is check-in and check-out at Castle Bromwich Hall Hotel?

Check-in is from 02:00 PM, and check-out is until 11:00 AM. You may request early check-in or late check-out during booking, subject to availability. Guests checking in or out before or after the designated periods may be charged an additional fee. The hotel offers luggage storage to guests for before check-in and after check-out. The front desk is always open, day or night.

How do I get to Castle Bromwich Hall Hotel?

For those who wish to drive their own cars, Castle Bromwich Hall Hotel has a car park right on site for maximum convenience. Parking is free for guests.

Start your mornings right, with the continental and buffet breakfast options offered at Castle Bromwich Hall Hotel. Adults can enjoy breakfast offered with an additional charge of 10 GBP if not included in the room rate. You may save on breakfast costs with Agoda by booking a room with breakfast, which is often included for less than buying it at the hotel.

What is the smoking policy at Castle Bromwich Hall Hotel?

Castle Bromwich Hall Hotel does not permit smoking in any of its rooms, but allows smoking in designated areas.

What is the closest airport to Castle Bromwich Hall Hotel?

The closest airport to Castle Bromwich Hall Hotel is Birmingham Airport, 7.1 km away.

What is the closest train, metro, or bus station to Castle Bromwich Hall Hotel?

What restaurants are nearby Castle Bromwich Hall Hotel?

Castle Bromwich Hall Hotel’s neighborhood is Birmingham Airport which includes popular restaurants such as Bill's, Jilabi and The Little Owl.

Located in the Birmingham Airport area, Castle Bromwich Hall Hotel is close to great shopping choices like Resorts World Birmingham, The Fort Shopping Park and Antiques for Everyone.

What are popular attractions near Castle Bromwich Hall Hotel?

Castle Bromwich Hall Hotel is located within Birmingham Airport, which makes it conveniently close to natural sights including Bosworth's Wood, YorksWood and The Catmore.

Take everything available in Birmingham with a comfort stay at Castle Bromwich Hall Hotel. Conveniently located only 7.9 km from Birmingham New Street Railway Station, a stay at Castle Bromwich Hall Hotel adds efficiency to your trip with easy city access and diverse day trip options.
Have a hassle-free trip while enjoying the services and amenities offered by Castle Bromwich Hall Hotel. Never be out of touch with your contacts, with free Wi-Fi offered throughout your stay. If you plan to arrive by car, you'll appreciate the hotel's free parking, right on-site. The hotel provides front desk services such as express check-in or check-out, luggage storage and safety deposit boxes for guests' convenience.
If you need, the ticket service and tours can even help you book tickets and reservations at all the best shows and programs nearby. Staying for a long time, or just need clean clothes? dry cleaning service and laundry service offered at the hotel will keep your favorite travel outfits clean and available. For lazy days and nights, in-room conveniences like room service and daily housekeeping let you make the most of your room. Please be advised that smoking is not allowed in the hotel to allow cleaner air for all guests.
Smoking is limited to designated areas only, for the health and well-being of all guests and staff.
Equipped with handy amenities, guestrooms at Castle Bromwich Hall Hotel guarantee a comfortable stay for all travelers. In-room entertainment such as cable TV, is provided for guests in select rooms. The hotel also offers a coffee or tea maker and mini bar in some rooms for when you feel like it is needed. It's good to know that a hair dryer and toiletries are provided in some guest bathrooms.


Dining and things to do

Nothing starts a morning better than a delicious breakfast, which you can always enjoy in-house at Castle Bromwich Hall Hotel. If you don't feel like going out to eat, you can always opt for the delicious dining options at the hotel. A night in at the hotel's bar can be as fun as a night out with your travel companions.
Recreational facilities at Castle Bromwich Hall Hotel are designed for escape and relaxation. Have fun with your friends or family, or even meet new people at the shared lounge and TV area.

Most talked about facilities

Things to do, ways to relax

Available in all rooms

Extra beds are dependent on the room you choose. Please check the individual room capacity for more details.

All children are welcome.

Provided by verified guests of

Beautiful old building with potential for great things but let down by in-experienced and badly trained staff and a mattress in our room as old as the building. If under new management could be a real find off the beaten track.

Ideal stop over for airport or NEC. ”

Original 16th century building and interior. Ideally situated for stopovers at NEC and Birmingham airport. Staff friendly and Marius looked after everybody very well. Down side is the food. Wouldn't rate the food experience as good and infact didn't pay for my main course. My wife's meal was ok. Chef needs to learn to prep his food better and if the menu says pie and mash let's have some pie and mash and not casserole with a flaky pastry lid and mash in with the casserole. Also be aware that if you have an early start there is no early breakfast option.

Happy with my stay

Did you find this review helpful?|
9.2
Exceptional
SUZANNE from Spain
Family with teens
Classic Double Room
Stayed 2 nights in December 2019

Lovely hotel, easy to park and the staff were very very friendly and helpful.

Lightbulbs missing left room very dark Bath stopper didn't work Paper thin walls, woke a few times in the night with the noise Bed not comfy, left with a stiff shoulder Paid for breakfast but wasn't able to get anything as I had to check out before 7:30am. At the weekend they only start serving after 7:30.

Rooms very clean & comfortable. Staff very busy because of wedding and some mix up with one of our room bookings. Breakfast was satisfactory but could be easily improved.

Mixed bag. Would stay again, but only if the problems were fixed”

Good: - Some of the staff were very friendly and helpful - Communal areas (lounge, bar, toilets etc) were very nicely presented, clean, tidy, and pleasant to spend time in. - Parking was ample, free, close to the accommodation, secure and easy - The building and the grounds are beautiful, traditionally decorated and and very well kept. If you couldn't see the towers in the city centre, you wouldn't believe you were in Birmingham - The rooms were clean, and the bathroom in particular was very nice - The bar was a very nice place to be, and the selection of beers and lagers were lovely, if a tad expensive Bad - Other members of staff were less than helpful , and clearly did not have the training to provide the service necessary. They were absent-minded and badly organised, and sometimes quite rude - Toilets were strangely out of stock of soap. Despite several complaints about this, people were having to either go up to their rooms to wash their hands,m or just not bother all together - Room was cold, slightly out-dated, and the bed was very uncomfortable. The mattress felt very cheap and old, and was in desperate need of replacing. A room at a Premier Inn would have cost the same if not less, and the beds are much more comfortable there. - The room had a TV, but strangely someone had taken the batteries out of the the remote, so it was useless. - The food was very sub-par to say the least. The sandwiches ordered from the bar were wildly expensive and were very poor. £8 for a grated-cheese sandwich on stale bread? We couldn't believe it at the time... - All of the walls have big black scuff marks all over them, in the lounge, in the rooms, in the hallways. It is not a good first impression.

Room was very clean and warm. Staff were friendly and helpful with all queries including after check out. Food in the bar area was exceptional quality.

Stunning Building...let down by food”

Stunning 16th century hall, tastefully renovated. Rooms were comfortable. Dinner was OK; breakfast was a disaster: 2 attempts to get a hot cooked breakfast failed...anf the Manageress on Bar and Reception was MISERABLE!

A hotel with a class and perfect ambience.”

the hotels ambience is top of the world, combined with very good restaurant end very nice rooms, i recommend this hotel to everyone. perfect for business conferences and meetings as social events.

Fixed things for me on request”

I was given a tiny room with no space for luggage no phone no hair dryer and I hurt my leg on the bed as it was so hard to walk around the bed. Room was horribly overlooked, I asked for a move and this was done. No xomplaints

Suitable for a business stop over”

1 traveler found this review helpful. Did you?|
This is a popular property. Don't miss out!

Back to search results

Back to room choices 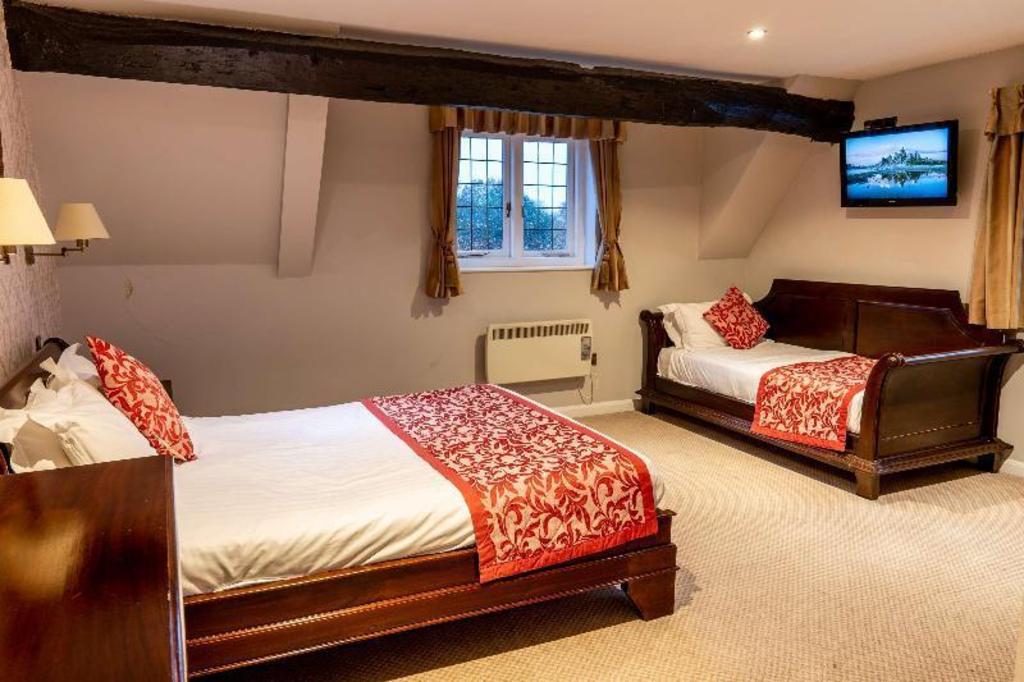